What type of handrail to use

What type of handrail to use

Hello. I am finishing off the hallway in my house. Those are not the final colours. I like the gold colour but plan a dado rail and anaglypta for the dado painted that colour. Wood will be woodgrained. THe white will probably turn cream. I would live without a handrail but I probably need one really, but I don't care for the stick on some bent brackets. Does anyone know of a nicer solution or a more traditional solution? I was thinking perhaps just one that was like a moulding screwed to the wall, but it might no go very well with a dado rail, or might have to take the place of a dado rail up the stairs. Does anyone have any ideas?

For once I can offer some advice on the traditional option at least, you could argue its not exactly attractive but it is functional and most importantly original. But the hallway wouldn't have had dado rails originally if that makes a difference. 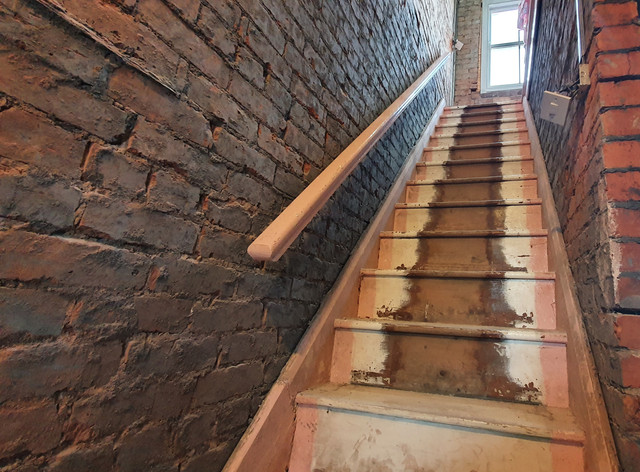 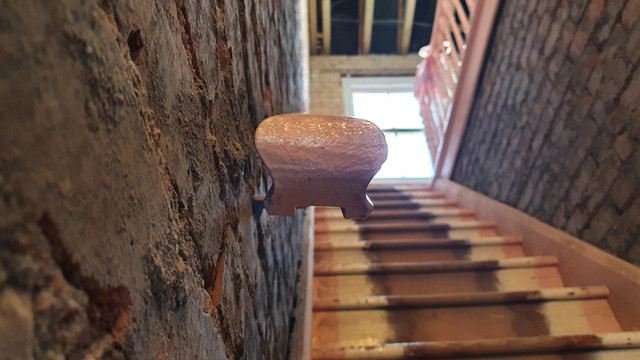 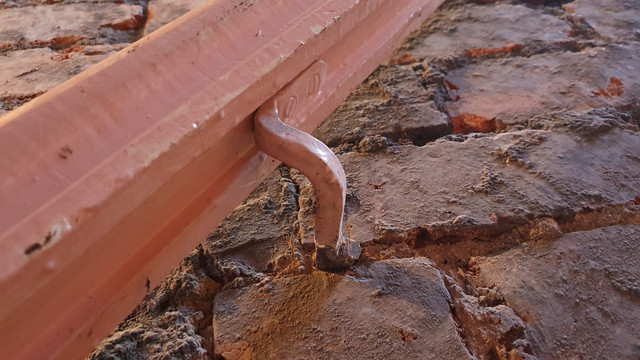 This type would maybe blend in better with a dado rail:

Yes, pig's ear is what I'd suggest. I got a bit of a bargain from Dresser on that one - ordered one in softwood for my attic stairs, they phoned me up and said they hadn't got any and didn't want tool up for it as it's not popular, would I mind having a hardwood one instead that was in stock for the same price?

It looks lovely in the storage brackets in my garage roof (where it's been for the past 3 years), much better than the modern ugly but functional one that's on my attic stairs

We had a pigs ear one, looked lovely and worked wonderfully - I'd recommend that provided your walls are flat-ish
Top

THanks for the ideas. THe pigs ear was the kind of thing I was talking about but I didn't know the name. I am interested by the original rail in Craig's house where the staircase at least looks similar to mine. THat profile is nicer than the mop stick. I am beginning to think I won't have a dado rail, just a painted dado as I changed the white to cream and I liked it better! I don't think my house had a dado rail originally either.
Top

It partly depends on whether you want an actual rail that you could grab on to, or simply some kind of flatter wooden moulding. They are narrow stairs and a rail will make them even narrower.
People will inevitably trail their hands up the wall as they go, leaving greasy marks and scratching the wallpaper, and even a flatish section of moulding gives a lot of steadying even if it isn't actually a grab rail. They also look nice as continuations of the dado rail, running straight through connecting hallway to the landing.
Top

CliffordPope wrote: ↑
Fri 5th Feb, 2021 9:38 am
People will inevitably trail their hands up the wall as they go, leaving greasy marks and scratching the wallpaper

Or rather, in the case of the brick in the photo above, scratching their knuckles on the rough wall when they try to use the rail!

If you want a serious handrail to be grabbed then it needs to be grabbable (sp?) - away from the wall so you can get fingers round it, and of the right size. We found that the hand rail supplied for steps at the church entrance was far too wide for old hands to be able to hold (as opposed simply to run hands along) - it was about 4 inches wide! I think 40mm is the right diameter (IIRC).
Last edited by MatthewC on Mon 8th Feb, 2021 3:58 pm, edited 1 time in total.
Top

Have you thought about the anaglypta you were using for up to a dado , just wondered if any suggestions as I’m doing my hall up ?
Top

The hall in our first house - 1932 terraced 19ft total width - had a dado on the rooms side only, that would be your left. It ran as far as the last door frame, not up the stairs. Anaglypta beneath, gloss painted.

I think in this case it's a matter of what you like rather than any particular correctness, although in what is essentially a passage rather than a hall, there is perhaps a risk of over egging the pudding.

A rail is not essential, unless you plan to live there until you get old and decrepit. It won't get that much traffic, will it? And as Clifford says, it will make the stairs narrower.

As a random thought if you really want something, what about a rope?

Perhaps you're right and a simple painted dado would be more appropriate. That way I can add a handrail at another time if I decide I need one.
Top

A rail is not essential, unless you plan to live there until you get old and decrepit. It won't get that much traffic, will it? And as Clifford says, it will make the stairs narrower.


It wasn't the plan but prices are rising as fast or faster than I can save and I haven't found anywhere I like yet.
Top

I recalled this "old" post so thought I would chip in following my weekend revelation.

We have a central stair that is very steep, no way close to building regulations, one of the previous owners apparently fell down them and died. 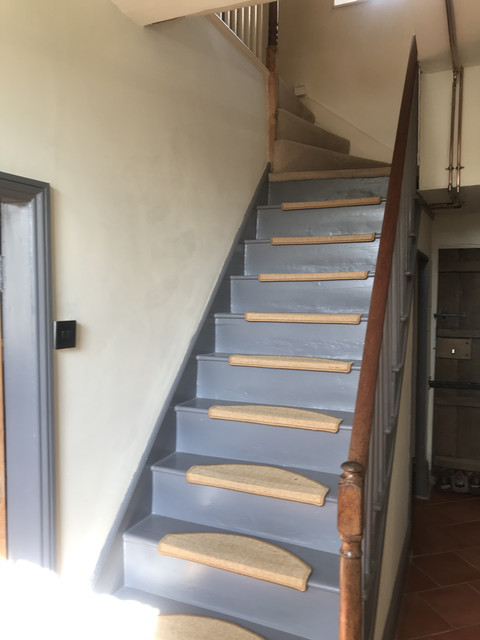 This weekend I got around to fitting hand rails to the wall and the return at the top. 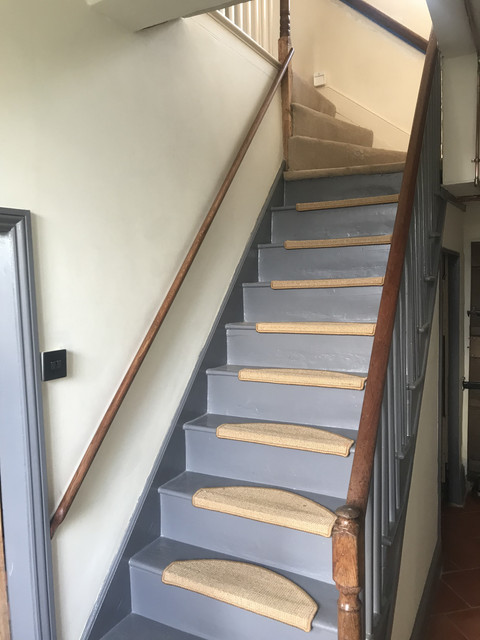 (Solid oak pigs ear molding, died a dark oak and oiled, screwed to the walls with and then the screws covered with wood plugs.)

I am amazed at how much of a difference they make, they have totally transformed the use of the stairs and top landing. I would have done it much earlier if i had realized.
Don't under estimate hand rails, even if they are not the most aesthetically pleasing and narrow the stairs.

I'm showing my ignorance I know but I'm intrigued by your stairs Richard.

Is that carpet fitted to each of the treads and, if so, how is it fixed?
Top

Is that carpet fitted to each of the treads and, if so, how is it fixed?

Yes, they are bits of carpet. They are specially made carpet treads and are fully edged / hemmed.

They have a black plastic 90 deg edge for the nose of the stair and by design are fitted with a strip of double sided tape on this plastic. Due to the damage to our stairs I fitted them with two strips of double sided and a generous amount of grip fill to account for the wear to the tread nose. 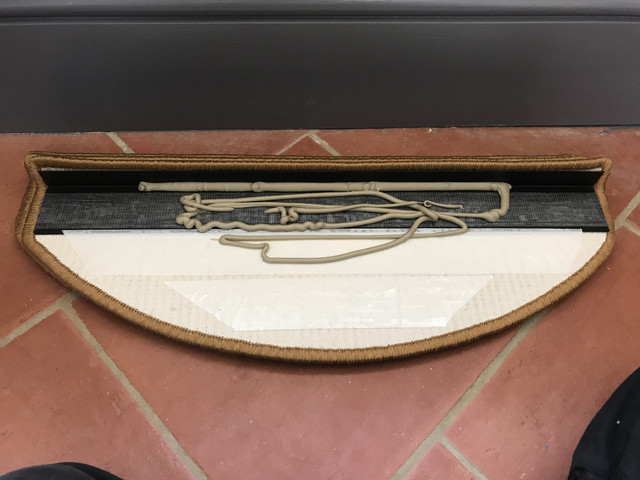 The design director wanted to go back to bare wood but the stairs were in just such bad condition it wasn't possible.
The surface of the treads was in very poor an uneven condition, the nose was almost worn off on some treads.
The depth of step is also to short so when going down your heel rubs the back / vertical bit of stair and they were also badly chewed up.
Under the stairs is the downstairs WC and the gaps in the stairs were so bad you could see who was in the toilet.

To explain my interest. When we took over the stewardship of Fircroft all but two carpets, in what had been and still are seldom used bedrooms, were evicted with prejudice on the instruction of the First Lady - the previous owners kept a large, and seemingly constantly wet, dog. Those dispensed with included the master bedroom and stairs. This action, completed even before the first Removals truck had been unloaded, whilst significantly improving the atmosphere – as hoped and fervently desired - revealed some, but by no means all, of the sins of the previous owners.

At the time the immediate, and in my view most urgent, priorities were to 'shore-up' the initial flight of stairs to the first landing as it seemed that the carpet had been relied on for too long to maintain its structural integrity, and then to produce custom wooden blocks for each corner of our bed so that we could avoid unexpectedly rolling out of the same at some ungodly hour. I've recounted, in an earlier Fircroft Chronicle, the tale of my much-delayed efforts to level the bedroom floor and during which it was also necessary to replace the flight of stairs from the landing and the top-most surface of the landing itself - I was still, two years later, in debate with the CO concerning the design constraints of the preliminary flight of stairs to that landing, ho-hum.

I digress but this background may be amusing to some. Whilst pleased with the final appearance of the new hand-built oak stairs and landing, I have recently grown concerned that their appearance is a little bland and in time may be marred by future traffic. Initially my, and the First Lady’s, thoughts turned to narrow carpet runners held in place with suitably period compliant rods – if such could be found. However, such considerations were set aside pending either agreement of the Conservation Officer to my most recent proposals or the existing stairs crumbling to dust, whichever comes first – my monies been on the latter for some while now.

Serendipitously though his blessings were finally bestowed shortly before your post and reply to my query concerning your stairs. Thank you again – I now at least have another, and in my view, more appealing approach to consider.

– [Bad Word],{aw c'mon, its not that bad} I’ll let you know how I get on in another couple of years.

Users browsing this forum: No registered users and 19 guests