Arrived today. Clearly not a fantastic quality set (fair enough at the price), but I reckon it will sharpen up OK and, more usefully, the plainer blades can be ground down to what shapes I want. All in all a useful buy, thank you Richard!
Top

As I know how much some of you love my suggestions

I thought I'd share another recent purchase.
SWMBO didn't want to pay for a carpet fitter as "you can do that" 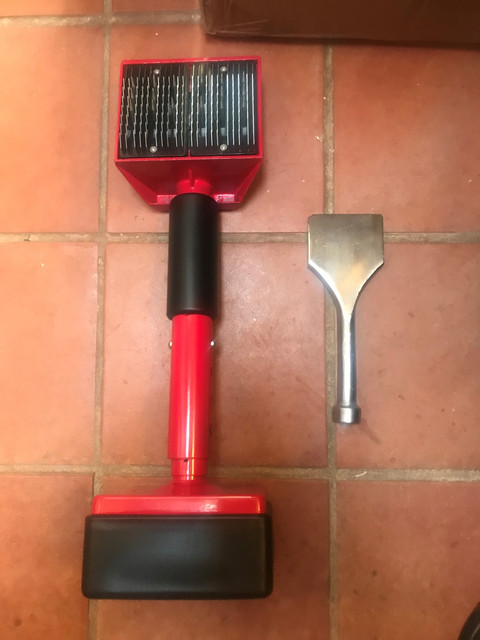 The new carpet isn't coming for a month but I have already been able to tighten up lots the random sections of carpet I have pulled back to get various over time.

The stretcher / knee kicker and chisel make it really easy to get the carpet into position and back tight onto the grippers.

I'd recommend getting one

The number of times I have heard that, plus, of course, it's corollary (when I have been slow in gettng round to a particular job): "Could we get a man in to do that?"
Top

Aha, I've thwarted your evil plan. I already have a knee kicker.

Plus one of these is the most useful thing imaginable, tucking carpet back behind gripper rods and under skirting being amongst it's many, many talents.

Alternatively, nick a wooden spatula from the kitchen. Just don't let your other half catch you

Imagine the mess... On second thoughts I'd rather not...
Top

Japanese cats paw. Make sure it's Japanese! The steel is amazing and I spent four years peering at metallurgy samples down microscopes. Shark grip or Bakuma. Estwing used to do a Japan made one but I hear it's made in Taiwan now. I just finished 5 months of restoration on 1725 and 1748 Georgian floors and removed several thousand often rusty, sometimes large cut and forged floor nails with my three cats paws and they are hardly marked!

Festool / Tanos systainers. I arrive with a short wheelbase van carrying a long wheelbase amount of equipment. Systainers. Yes they're addictive. Yes they are ABS and not PA6 nylon so you can't throw them down the stairs, but again, brilliant.

Festool dust extractor. How many extractors have I had? Must be over 20. There is no other. Brilliant. Eye wateringly expensive until you use it, compare it to a Meile or Dyson and realise you can sell it 10 years later for half its price on eBay. Accept no substitute.

Bosch 12v (10.8v same thing) professional drill drivers with 6ah batteries. I do have an 18v drill for emargencies and a 2kg hammer for concrete drilling, mixing and light breaking but I just restored over 100sqm of 250yr old floors, including tens of metres of joists and noggins using thousands of screws up to 6mm X 120mm and never had to get the 18v out. Yes they are expensive, for a reason, save your wrists. Get a 12v.

Yep, I've got 2 Bakuma ones, excellent quality and worth the money. Mine have had loads of abuse over many years and still work perfectly, the ability to grip nail shanks is very useful.

I like the look of the Hultafors Talmeter. My credit card is shaking nervously......
Top

Agree. I have a Bakuma, Shark Grip and Estwing amazing how the steel is hard enough to bite into the nail but annealed just enough not to chip, almost magical.

Talmeter, I have two 3m's because you can never find your measure... The 5m is great as has a clip on holster but is heavy. I threw it away like a noomin after I stepped on the end before I realised you can buy just the tape. Hultafors bought Fisco so most of their tapes are class one. If you are fitting noggins or studwork it's a no brainer. I might get a Big T too.

To be fair though, I think there are a few tapes out there now in 5m that use the body as a fixed length in the same manner. Btw Hultafors make great saws too, better than the Irwin rubbish and just as good if not better as the Bahcos. 3 tools. Lol.

Sorry. I know I have already cheated but I have the tools of at least 15 men, so I should get special dispensation...

Festool Rotex. No words. I resisted for years. Stubbornly bought the Metabo, the Bosch, idiotically the more expensive Mafell even, I was already using Festool dust extractors and had a zillion systainers but I refused to buy a Festool sander. True story.

Well, I could of saved myself a few thousand pounds.

It's expensive, but it's really not. It's the best hand held sander in the world and the best tool Festool make just above their extractors and syslites.

I bought the ETS EC150 which is a brilliant idea destroyed by the marketing w*****s desire to show off the EC motor by fitting counter productive and idiotic automatic vibration reduction. Which ruins the sander, also mine needs repair. I have never needed a Rotex repaired. In Guernsey I used 1500 discs sanding 400 yr old rock hard oak boards 11 times, mostly using the Rotex. Still going.

Buy it. Use it. Sell it. Lose less money than hiring a crappier tool for three days. Only problem is now you need a dust extractior...

same deal with the mini Rotex RO90. I tried every detail sander under the sun, all various shades of 'why the f has my backing pad melted again?' and I refused to buy the RO90, because well, too gimmicky and no detail sanders ever work better than a scraper, a piece of sand paper and a pokey stick. So it was almost certainly going to be more expensively useless. Wrong again!

It's brilliant. Ergonomics are a little pants, it's top heavy but meh. Not ultimately as useful as it's bigger brother due to small size but as a detail sander, it verks.

It's not the best detail sander, it's the only detail sander, because nothing else works. Amazingly the orbit pattern is softer yet more powerful, the backing pads last and the dust extraction actually works after a fashion.
Last edited by Toby Newell on Fri 12th Feb, 2021 6:27 pm, edited 2 times in total.
Top

From my days as a site engineer, I've always liked Fisco tapes. The 5m Unimatic is just perfect, big enough to be useable, small and slim enough to sit in your pocket easily. As a bonus it's made in Britain, rare for items like that these days, and not too expensive either.

I bought a 8m BigT a few weeks ago, don't like it, too big and bulky and falls out of your pocket. Harder to lose though!

Which brings me to another point - why is it that the cheapest, most rubbish tapes that come free with something are never the ones that get lost?

A bit like why do I go through so many pencils, but the ones that have been used for so long they are shorter than Donald Trump's current list of friends seem to never go missing?

And how bad must lockdown be and what is my mental state if I find myself "nerding out" publicly about tape measures??

I need to get out more.

No, I REALLY need to get out more.

I'm avoiding starting to book in a year's worth of work. That's my excuse. Yes, forgot the big T is 8m, natch, why can't they do a 5m?

8m is too big. I imagine myself rising from my normal quadrupedal working position to bipedal mode and standing upright briefly as I slowly but inexorably fall over sideways a la Del Trotter. Play it cool Trig. Play it cool.
Top
Post Reply
116 posts

Users browsing this forum: No registered users and 17 guests