As previously mentioned I bought a victorian terraced house recently. The previous owner of the property had laid a patio that is way too high - it's above the slate DPC and is actually slightly above the airbricks causing a bit of water ingress when it rains. They've also added a pebbledash render to the house and a concrete plinth to the bottom of the house just to complete the damage. The fall of the patio isn't too bad, and we don't have any pooling of water, just a bit of water entry into the air brick(s). 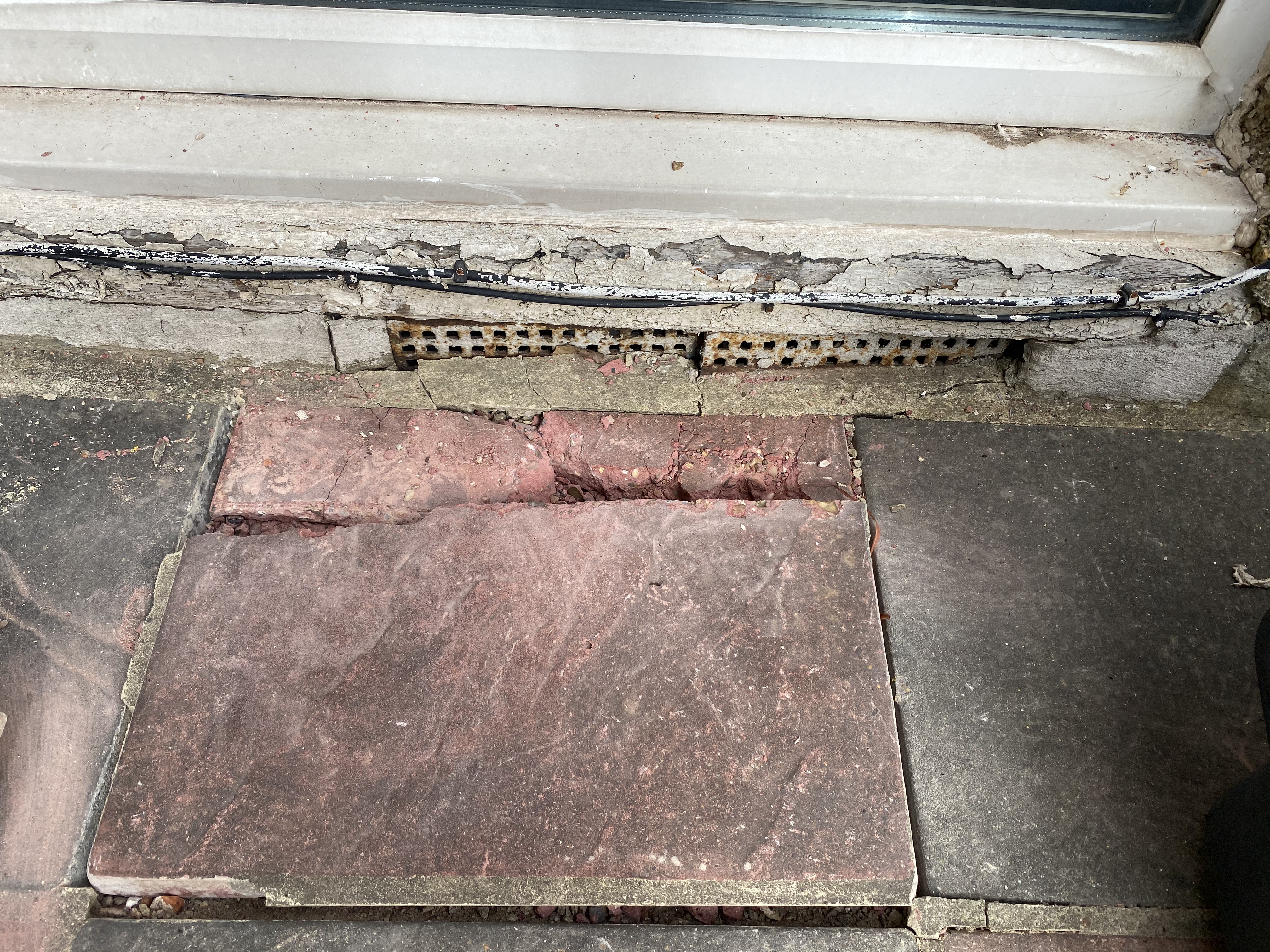 (The smashed patio slab in front is my handy work - just wanted to have a look and see what was under the patio and if that would explain why it was so high. Looks to be just more concrete. Joy)

I realise ideally we will have to remove the patio and re-lay below the DPC, but at the moment we don't have the cash to do this.

As a temporary solution I'm thinking of building a gravel filled French drain around the wall perimeter. My thoughts are to cut the slabs in situ using an angle grinder, and run the trench along one side of the patio and down to the grass... basically along the red dotted line in this image: 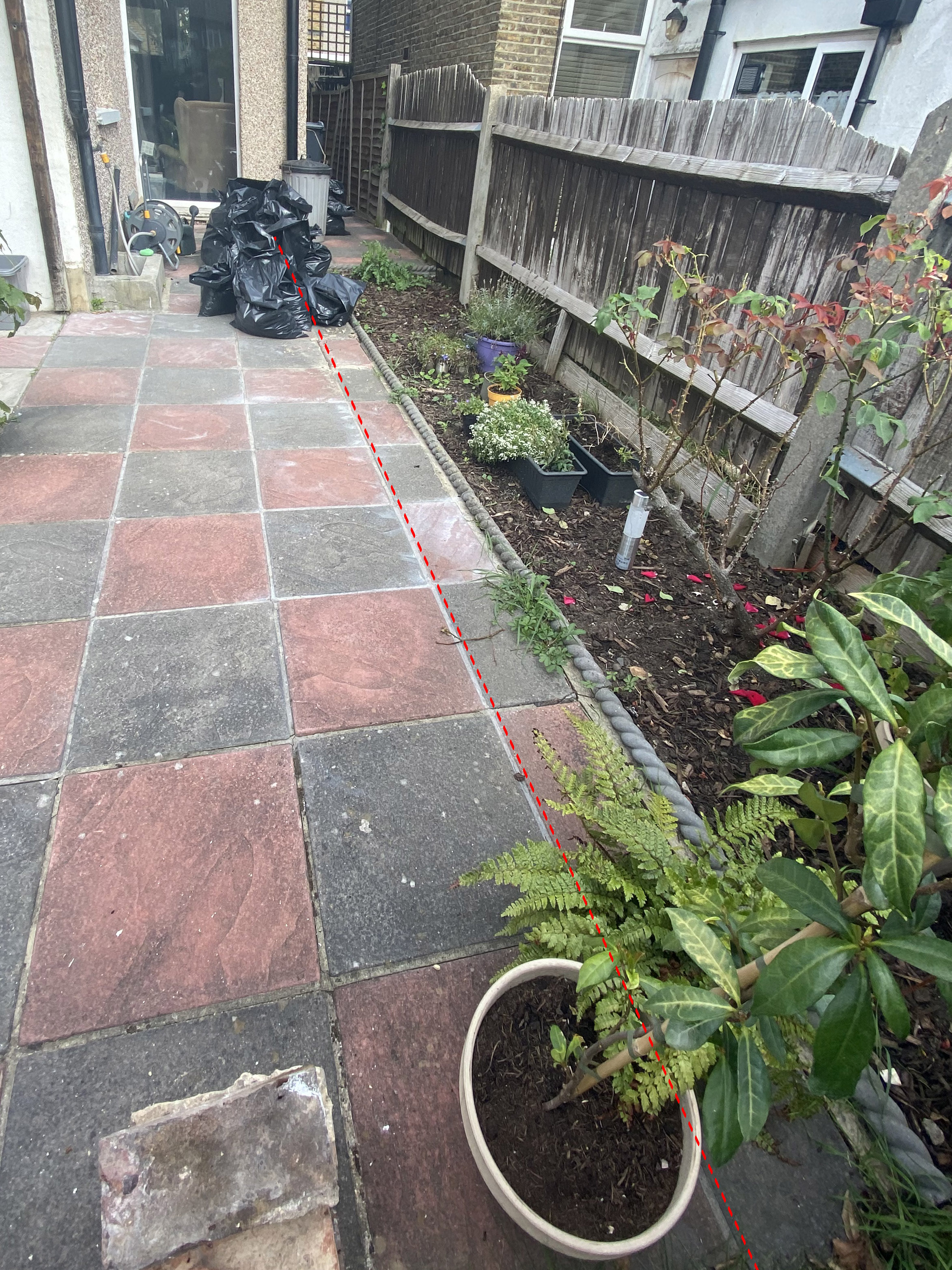 I'm thinking of using a 60mm perforated pipe within a non-woven geo textile membrane lined trench, and then filling this with some form of gravel.

What I wanted to know was the following:

2. Should the pipe be capped or protected on the ends? I was thinking of leaving the 'house' end of the pipe exposed (with a bend and endocap) so that I could run a hose down it incase of any blockage etc.

3. Does anyone have any recommendations of suppliers or what aggregate or gravel to fill the trench with?

4. Do you think this plan is a suitable stopgap solution?

As part of this I'll also need to replace the air bricks. Planning on fixing these in with a lime mortar. Does anyone have any recommendations for Cast Iron airbricks with insect/rodent mesh?

Any other advice or help that could be offered would be great!
Top

Zebra did a lovely trench solution in a similar situation, which I shamelessly copied, let me try and dig out a link

a twig wrote: ↑
Thu 10th Sep, 2020 9:22 pm
Zebra did a lovely trench solution in a similar situation, which I shamelessly copied, let me try and dig out a link

Thanks a twig, will have a read through all of these.

Have you found your drain useful? Any teething problems since installing or things you would change?
Top

Mine's been great, sorted out the remaining damp issues in the wall completely. I did the bare minimum to start with, so just a three course retaining wall, dirt bottom to the trench and then trench half filled with 20mm gravel, and it worked a treat. Pointed up the now exposed stone work in NHL3.5 mortar. Job done

No regrets whatsoever, if it hadn't worked then it wouldn't have been too much effort to whip the gravel back out, put a proper drain in and connected it to the existing gulley to actually take any water away, but turned out not to be necessary.
Top

Airbricks, I used clay / terracotta ones, and then purchased some copper insect mesh and fitted that over the airbricks myself using screws and rawl plugs.

Personally didn't see the point in the expense of cast iron, but that's my personal preference!
Top

This is the approach we took, dug out to about 300 mm deep adjacent to the wall and sloping down away from the wall. 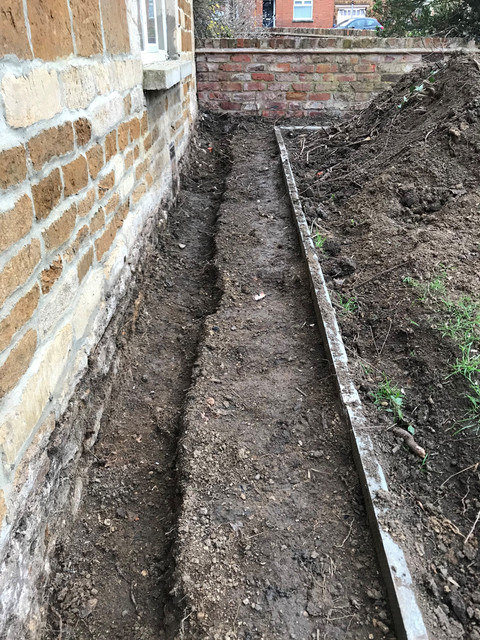 Geotech on the bottom and side but none against the wall. No perforated drain either.
Plain washed 10-20 mm gravel fill. 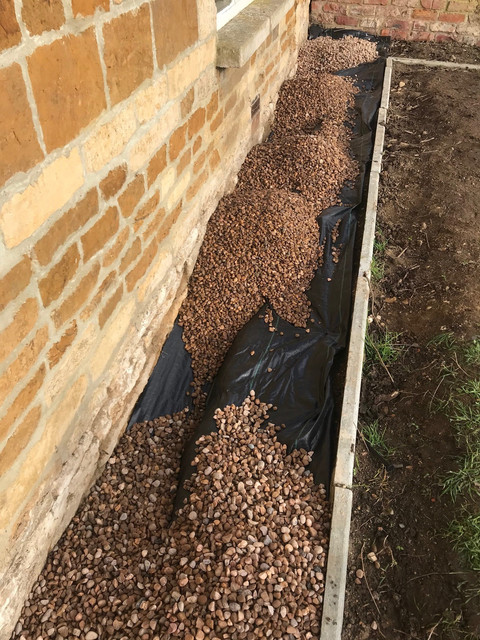 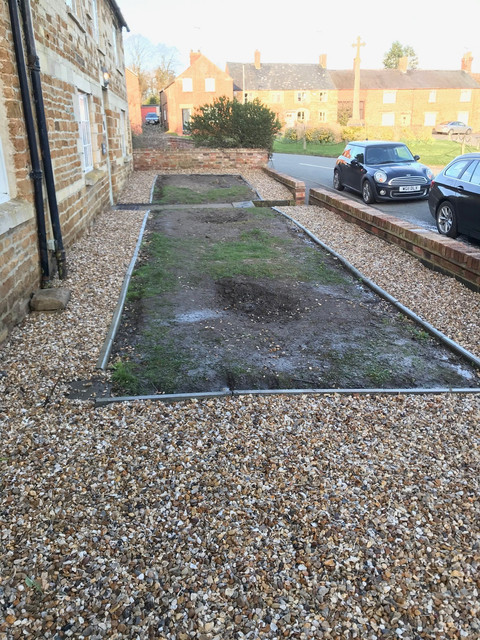 You can see the effect when it rains, it stays dry against the wall. 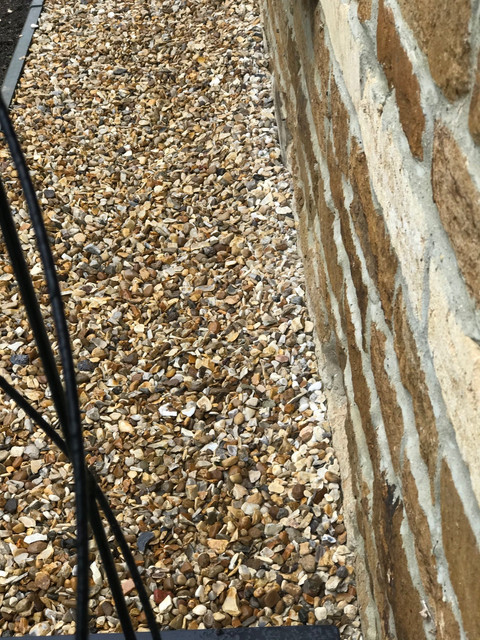 Overall it looks okay and the walls seem a lot direr, especially at the "buried" end of the house. 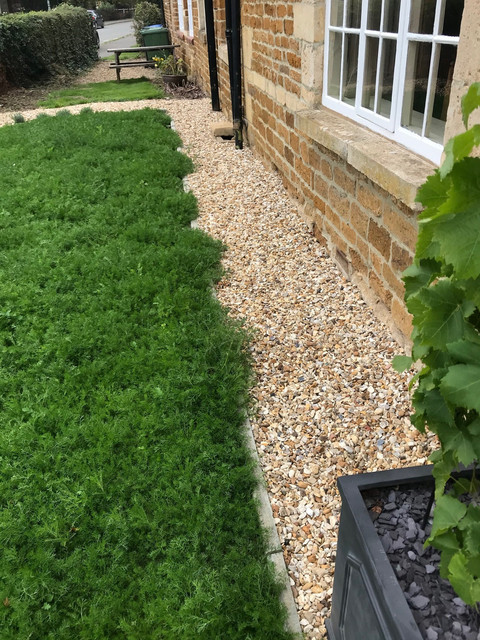 Good luck with yours.
Top

The high ground level beside the house is the issue here. If you can, I'd suggest that you first find out how thick the concrete is under your paving slabs. If it's only 3 or 4 inches, I'd remove the line of slabs closest to the wall and use your angle grinder to cut a line in the concrete about a foot away from the wall, then remove the concrete and some of whatever is below. If you can do this and get down below the DPC (hopefully to the earth), then add some pea gravel or slightly larger (as per RBailey's photo). That would stop water ingress through the airbricks and any splashback (and so help the wall to dry out), pending a French drain with soakaway and new lowered patio when you can afford it.

I did this job on my house as a priority. There was a concrete path outside, about six inches above the kitchen floor tiles which were permanently damp, and outside the lounge there was soil on concrete above the level of the suspended wooden floor inside - I could hardly believe that the soil had been deliberately put there by the previous owner, with flowers planted in it! Eventually the groundworker removed about 100 tons of earth, but the job above was a noticeable major improvement.

Great stuff, thanks so much for your replies!

I think our main thinking with running it so far away (with perforated pipe) was that we didn’t want any issues with water pooling on the foundations or not fully draining and water logging the trench (and becoming a moat!

Do you think we can get away without the piping then?
Top

Hello! I originally did a gravel filled trench with a perforated pipe in the bottom. It didn't work. The gravel, though free draining, holds moisture, and when you scrape away the top centimetre will be moist underneath. Therefore although better than concrete against the wall, it does not allow the wall to dry fully.
I had to go much further than you though. Ground level was about knee-high outdoors compared to indoors.
As for the perforated pipe, unless you're dealing with a large quantity of water (for example if the patio sloped the wrong way) it really achieves nothing. If you're only dealing with the water that actually falls on that strip of ground, it isn't enough to require piping away.
I took the gravel filled French drain away and built a retaining wall with an open trench, eventually covered by fibreglass grating.
Top

Whether or not you will have a "moat" is typically down to topography of your land and how free-draining the strata is around your property. If you live in area an with clay bands in your soil then it is indeed quite common for rainwater to build up in the trench. If however, the ground is free-draining, then percolation will be good and you should end up with a French drain that performs as expected (evaporation plays a role here).

Echoing the sentiment from others here - there is no point in installing a channel so far away from your property. Remember, these channels are there in order to relieve your original DPC. Locate the DPC and then dig the trench ideally no less than 150mm below where the DPC is located. Lining with geotextile fleece prevents the earth readily "bleeding" back into the gravel. Be mindful of what you use to backfill the channel - graded pea shingle is the best option in order to encourage good percolation.
Top

I'm with Zebra. I had a high ground level outside causing damp inside which was already filled with french drain. Scrape off the top layer of gravel and the gravel underneath was wet. To fix damp inside the wall outside needs to breath - so needs to be lime pointed and exposed to the atmosphere. Being exposed to sodden wet gravel won't help it dry out.
Top

Thanks, this is all really helpful. I think we’re going to give it a go with just the trench just around the perimeter for now, and drop the idea of the perforated piping. Will post an update once it’s done!
Top

Bit of an update - I've started digging out the trench, and discovered another patio under the patio. Good times.

Just digging past this and I believe I've come across the start of the foundations, which seem really shallow (as I've been told they might be in a period property) 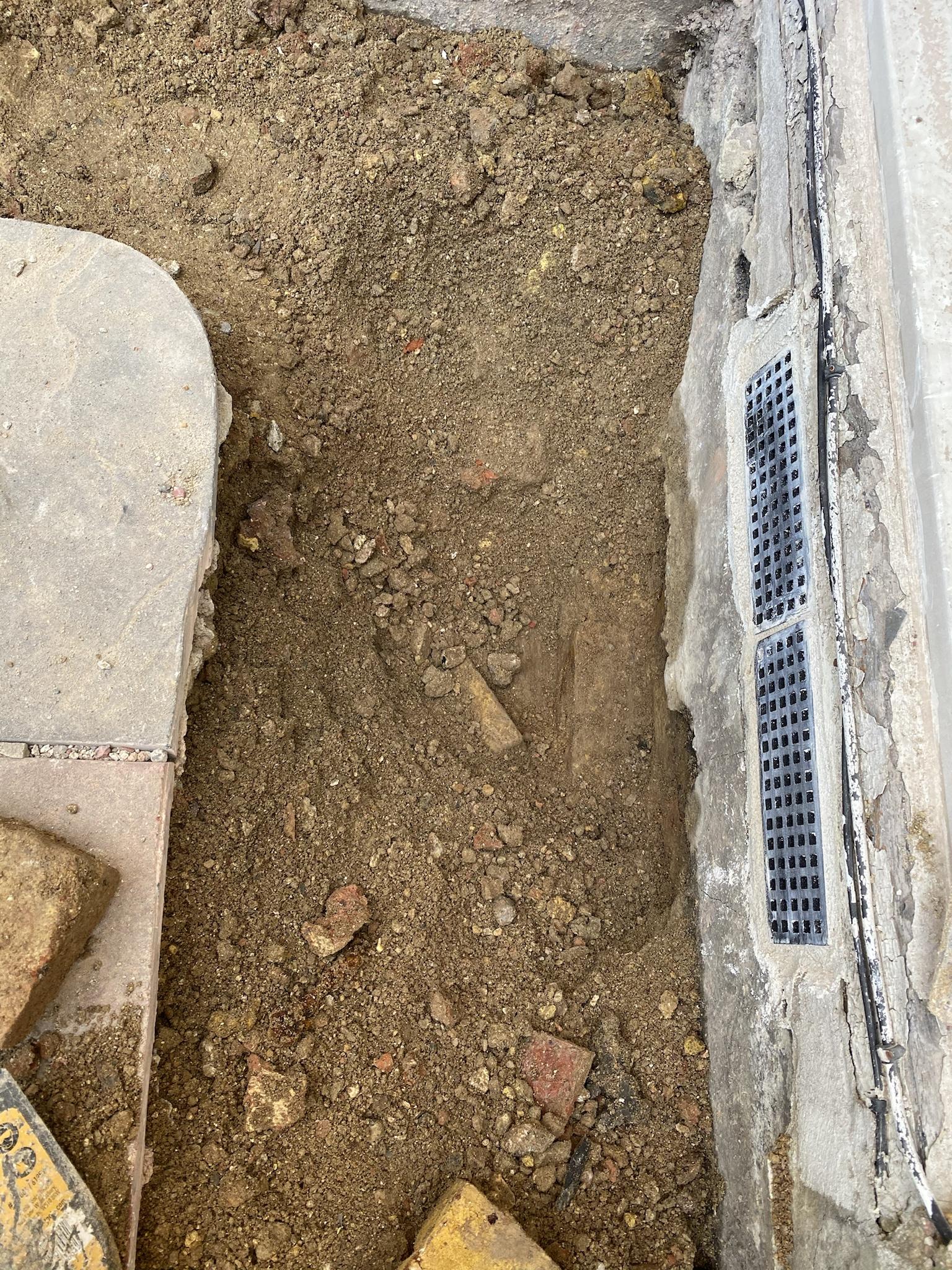 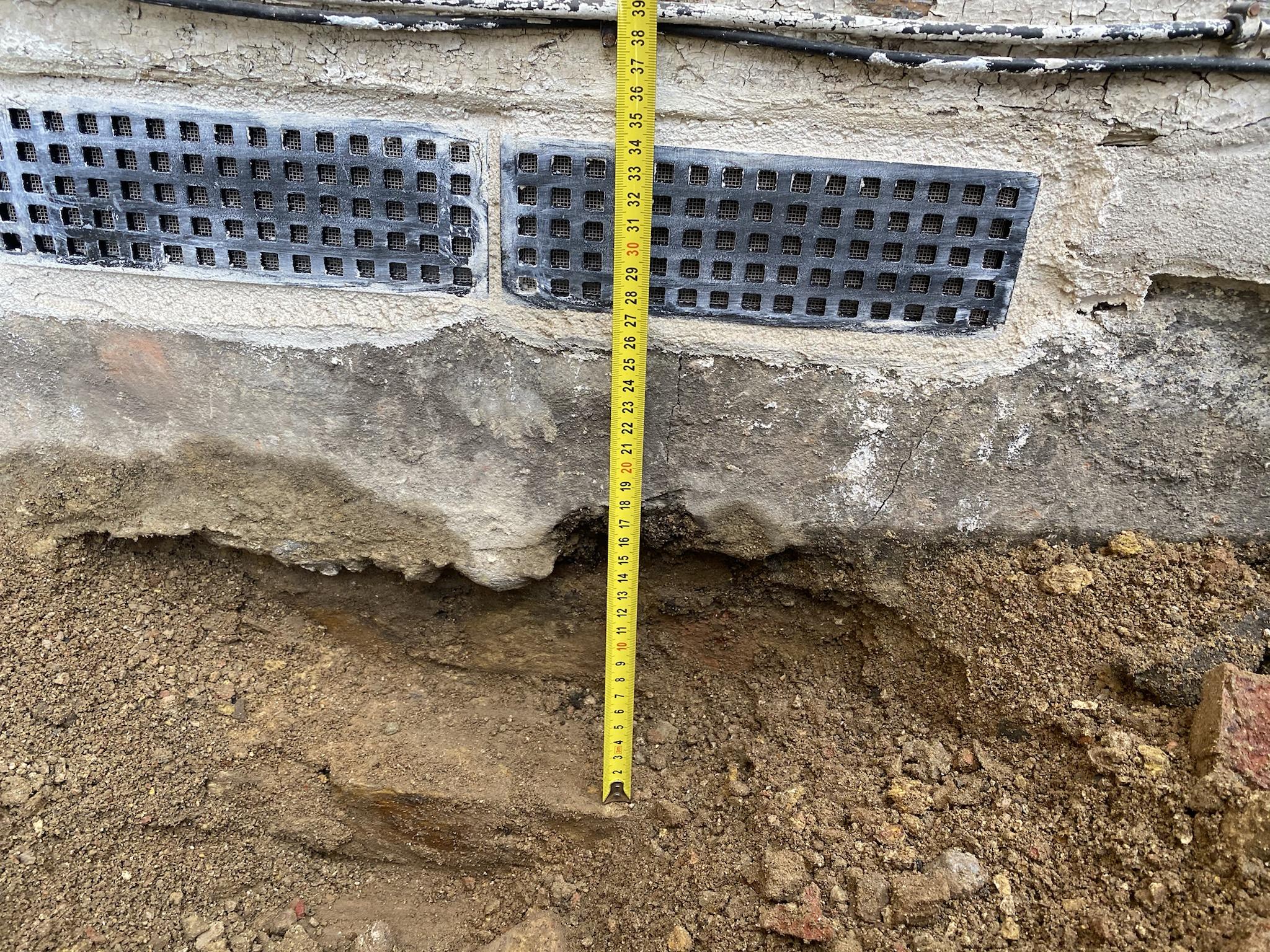 The slate DPC is just at the bottom of the mortar line below the air brick. I'm going to dig the surrounding area down and away from the foundations at a 45 degree angle, but just wanted to check in on how far down I should go? I was originally told 30 cm down, but I'm a bit wary of disturbing the foundations (even digging away at at angle). Any advice would be appreciated.

Additionally, there are also a bunch of bricks like this thrown into the surrounding area (but not attached to anything) - 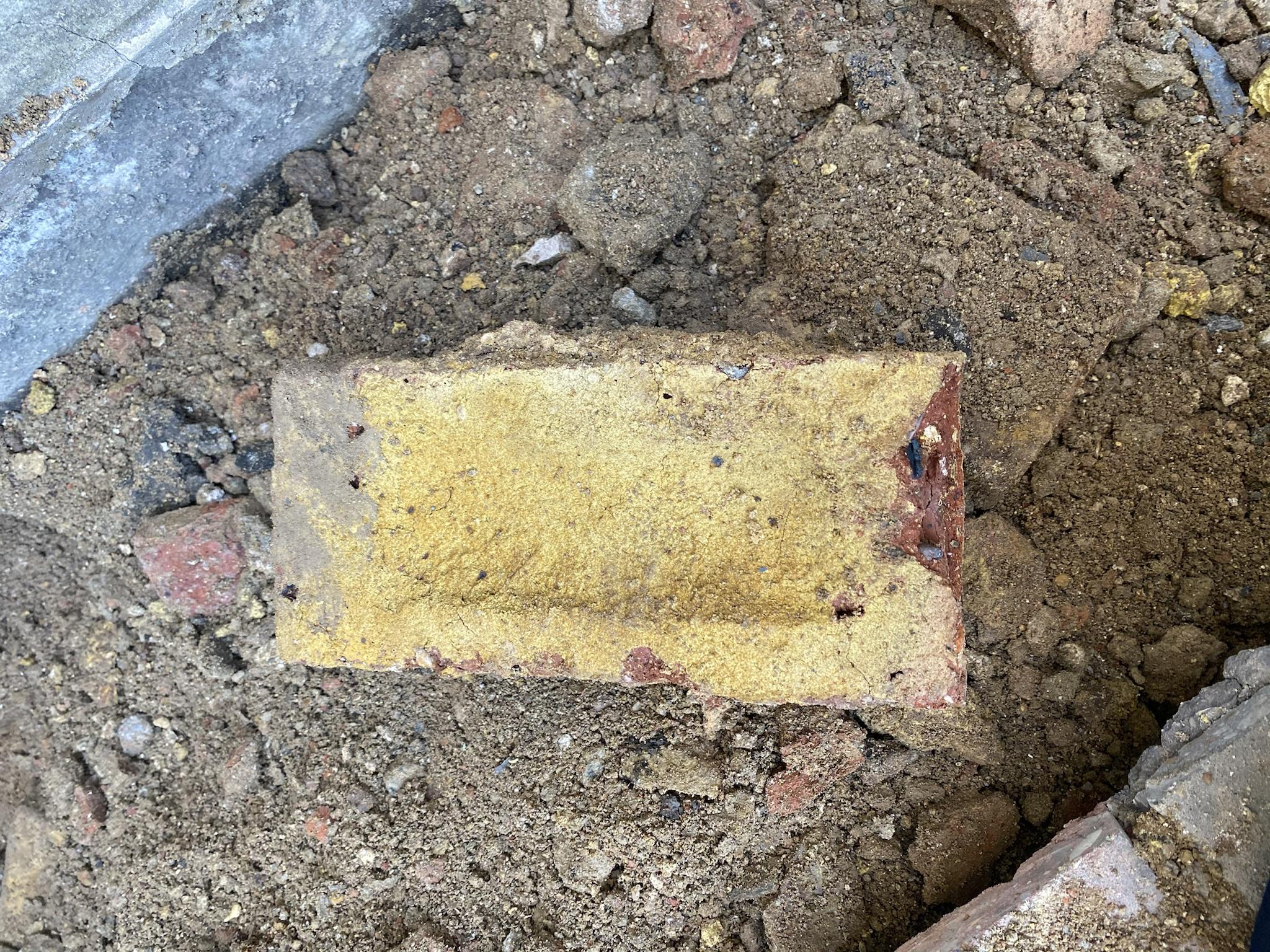 Does anyone know what these might be or what the yellow marks might be? They're loose in the soil, and not attached to the foundations or near the 'steps' of the foundations
Top

Just double check on where you think the slate DPC level is. Looking at these photos I can clearly see that an original slate DPC is clearly ABOVE the air bricks. Makes sure that the DPC level that you identify is the one that runs continuously around the original property.

As far as how far to excavate below the DPC, good building practice recommends NO LESS than 150mm. This is to prevent what is known as splash back, where raindrops hit the hard standing surface and bounce back up and over the DPC line.

A 30cm depth could be considered overkill...
Top

Surveyorman wrote: ↑
Mon 28th Sep, 2020 3:42 pm
Just double check on where you think the slate DPC level is. Looking at these photos I can clearly see that an original slate DPC is clearly ABOVE the air bricks. Makes sure that the DPC level that you identify is the one that runs continuously around the original property.

Thanks Surveyorman - Can I ask where you're seeing the DPC? I can't see the any slate above the Air Bricks (though the concrete plinth around the house is certainly not helping things!)

There is an old wooden sill above the air bricks/next to the two black cables - perhaps the images make this seem like it's the slate?
Top
Post Reply
23 posts