I am looking for advice as to how best we should proceed with what has got to be one of the most oversized domestic chimneys in Kent. We've known for a while that the render (sand and cement

) is a problem and that the flaunching around the chimney pots needs attention. However, given that the chimney sits in a valley between two pitched roofs and is probably about 5m from its base to the top of the pots we haven't got round to it until now. We've had scaffolding erected to give proper access to all sides so now we're faced with what looks like a rather daunting task. The chimney breast on the first floor is damp to the touch so we've known that there's been water ingress but with all the rain over the past few months it has definitely been worse.

I had a look on the weekend and the flaunching is indeed a real mess as you can see. The render is cracked in places and it's obvious that the bricks at the top are completely saturated.

What are your thoughts on how best to proceed? We were hoping that we could remove the render and re-render in lime once it has a chance to dry out but the builder we're working with has said that he's worried that removing the render will remove any structural integrity the chimney has and has suggested taking it down.

We would like to be able to install a wood burning stove and be able to be able (occasionally at least) to use one of the open fires but this is now looking increasingly unlikely.

As always I would welcome any advice.

My answer would be that those pictures don't tell you much at all and that you're just not going to know until the render is off.

The flaunching is nearly always knackered on chimneys that have had no attention, but it's really not difficult to replace. Here's the biggest chimney I've got here as a before - the flaunching was so bad it could be pulled off mostly by hand with no tools:- 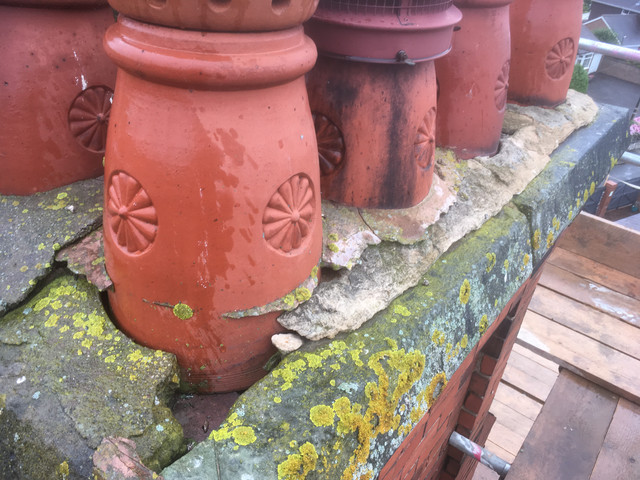 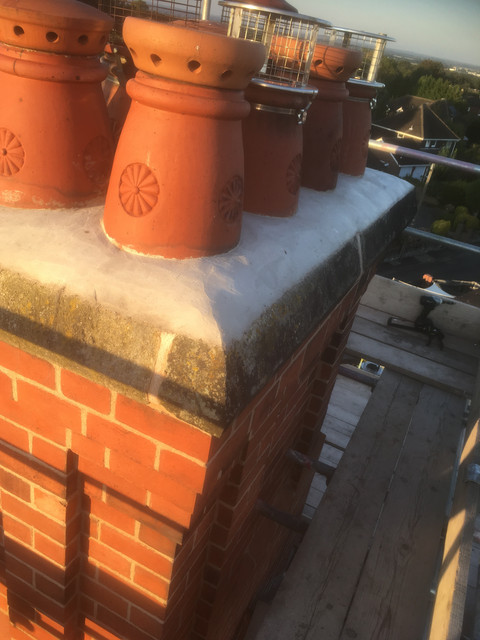 My advice would be take the flaunching all off, take the pots off, take the render off the top couple of feet and see what it looks like before you make a decision. Quite often a chimney will only need the flaunching and the top 3-4 courses rebuilding, unsurprisingly those are the bits that suffer as they're most exposed and see the worst water ingress.

Chimney thread on my house here:-

And don't panic if a tall chimney moves a tiny bit when you give it a shove at the top - they do, especially if they're tall & slender like the one on the side of my house!

I have to say I'd always be against removing a chimney - they are so much a part of the character of an old house. Worst comes to the worst take down & rebuild, they're not complicated structures usually.
Top

jsmac wrote: ↑
Tue 17th Mar, 2020 4:40 pm
the builder we're working with has said that he's worried that removing the render will remove any structural integrity the chimney has and has suggested taking it down.

It sounds like the builder is looking for an easy way out - the easiest solution for him not what's best for the house, or for you. Builders tend to do that!
Knocking it down should be an absolute last resort, if you've tried to repair it but have found it to be absolutely beyond saving.
Furthermore if you want to have open fires you should be able to, and not be coerced by your builder into giving up at the first hurdle!
Top

I agree, take what builders say with a pinch of salt. Even if it had to be partially or even completely taken down, I'm sure it could be rebuilt again couldn't it? Either do it yourself, or keep getting quotes from different builders until you find one who understands what you want. Sometimes you come across someone who amazingly just says "no problem" and just does the difficult job with no issues at all. These people exist but are few and far between, ans seem like angels when you find them!!! I found a plasterer like that, but not a builder yet!!!
Top

plasticpigeon wrote: ↑
Wed 18th Mar, 2020 12:26 pm
Sometimes you come across someone who amazingly just says "no problem" and just does the difficult job with no issues at all. These people exist but are few and far between, ans seem like angels when you find them!!! I found a plasterer like that, but not a builder yet!!!

And very, very occasionally you find one who actually has good suggestions to add...

Is that a sarcasm emoji?
Top

Wasn’t meant to be, but inadvertently it could be!!!

I genuinely found a decent chap who runs a sympathetic restoration company - he’s helped me out with major lime work beyond my skills a number of times and been a very useful sounding board too....

And no, I haven’t been drinking

@Feltwell - nice job lining up the pots! Can imagine the rest of it might have been done with half a consideration when the patterns on the pots are now in line.

Removing concrete render is likely to damage the surface of the bricks, but you don't have soft reds there so the bricks themselves are likely to be OK. My plan would to be knock the render off, rebuild loose bricks in lime (and not cement), lime render and then pop the pots back on and do the flaunching.

A builder when I questioned him asked "well how far do you want to go?" I was unaware that 'a nice job that works' might be considered unreasonable in this day and age. I should imagine there willbe a wider choice of builders available over the next few months should you become uncertain about advice.
Top

I was completely OCD when it came to lining up the pots, spending an age up there packing under them with bits of slate until they all looked spot on. Vitally important for part of the house that you can only see by squinting from about 60' away!

I've had a few chimneys repaired, though none quite as large as the OPs photo. Close up, the state of them can look rather daunting but in my experience a decent brickie would only take a few days - at most - to repair them. Our largest one (a 'four pot' affair) only took two days and by 'repair' I mean removing all the cracked flaunching, removing the pots, removing about ten courses of bricks down to a solid base and then rebuilding everything. From ground level it's pretty much impossible to tell it has been rebuilt (always a good thing!) and I think the scaffolding cost more then the actual work!

When the builder suggested 'taking it down' perhaps he meant taking down all the loose brickwork before rebuilding it? I agree with the above sentiments about not taking it down permanently - that, I think, would be sacrilege. As for wanting to install a wood burner, this is the ideal opportunity to install a suitable liner. I did exactly that with our chimneys and they've been fine ever since.
Top

My first house was a Victorian brick built terrace (unlisted) the chimney was shared with the neighbour which meant access from ladders was possible. My ex and the next door neighbour took the chimney down and cleaned/chiselled off the bricks. A builder put it back together at minimal cost.
I think it was about 10 courses and 4 pots that needed removing. We had a liner put in at the same time, I was the one on the ground floor poking it with a broom handle to make it drop. From recent experience I'd say scaffold is insanely expensive and to do the job right you need access from both sides of the chimney breast, but it's not an insurance job
Top

In fixing the flaunching and two new pots (due to holes), my b*******y brickies threw all 4 old pots from the roof. I was less than impressed and never invited them back!
Top

Thank you all for your advice and contributions. It has been very helpful and gave me the confidence to just get up there and have a look for myself. I'm glad that I did because saving the chimney pots was very time consuming and I'm not sure they would have survived if it hadn't been me doing the work. They're 1.2m tall and very heavy. The flaunching was made from a very strong cement mix so getting it off without destroying the pots took some time and patience.

One of the pots was completely cracked through the middle and beyond saving. I'm amazed that it didn't just blow over what with it being four storeys up and so close to the sea. Three of the pots are completely intact, one other has a hole that I'm hoping can be patched or hidden under the flaunching and the final one has lost some of its bottom but can possibly be salvaged when we build up the chimney stack again. So 4.5 out of 6 is not bad, I think.

Unfortunately, the state of the stack is pretty dire. We managed to take off about 6 courses of bricks after removing the pots and we were still finding matts of roots between each of the bricks. It has obviously been several decades since someone has been up there. Where we were able to remove the render it took the face of the brick with it. They are really beautiful yellow stocks so in its day this chimney stack would have been stunning. So sad that it has now come to this. We still have a bit over three metres of chimney so we're hopeful (perhaps naively) that we'll get to a sound substrate at some point and the stack can be rebuilt from that point.

Interestingly, one of the pots was connected to two flues (bottom left in the attached picture). We're assuming that this is the flue for the original Georgian range cooker that is in the cellar but I don't know why this would be. Some insight would be most welcome.

Thanks again. As always this forum is a brilliant resource. I'll keep you posted on this latest ongoing saga.

Users browsing this forum: No registered users and 3 guests